The Mystery of the ‘leaking’ Stainless Steel Water Tank 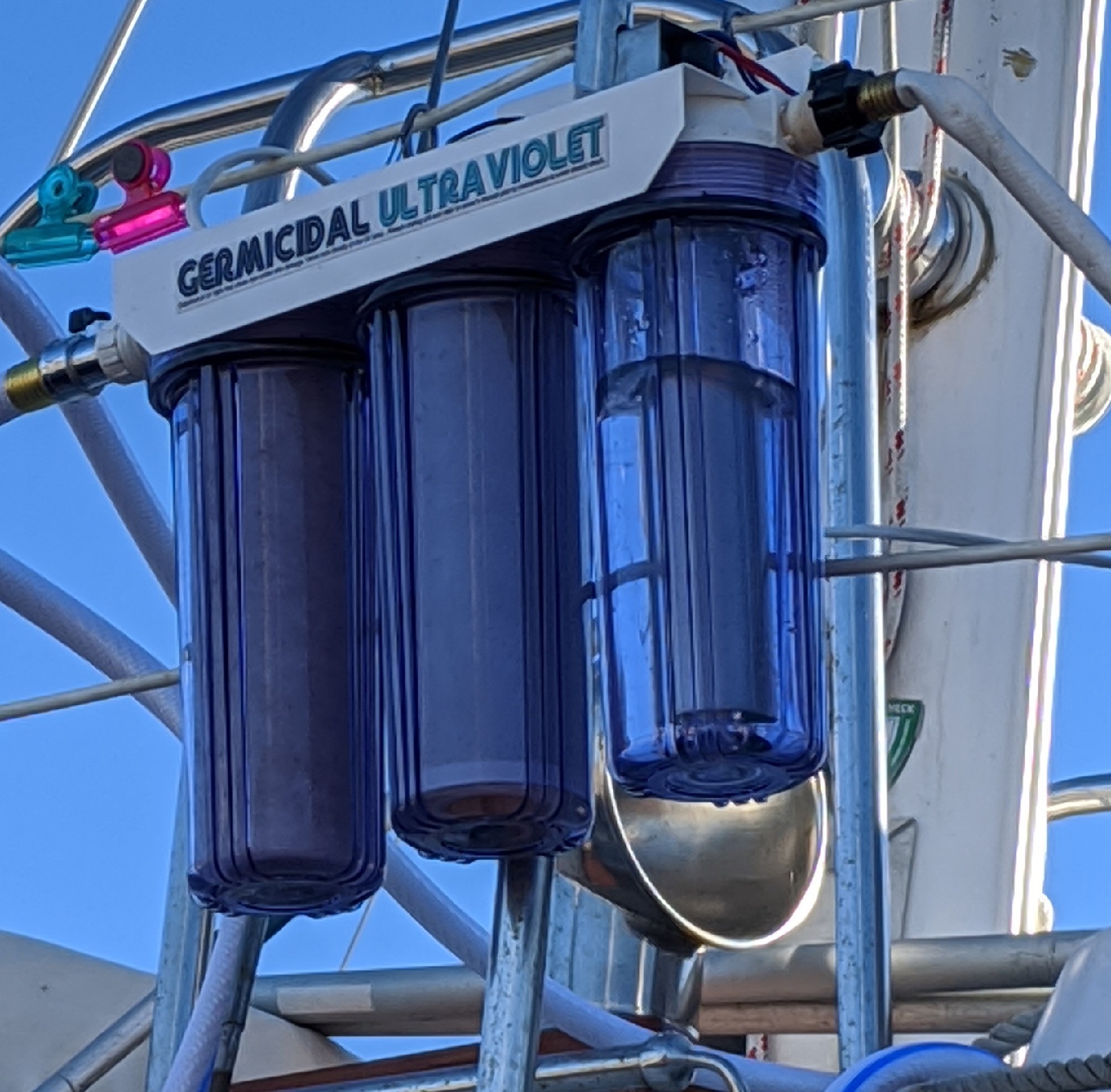 I’ve not used this blog since my posting about the purchase process of the Fantasia 35,  back in March.  It was the discovery of the supposedly leaking water tank that caused me to stop..  I’d done plenty of research on what can be done to patch a leaking freshwater tank on a sailboat.  In the instance of my particular model with the large stainless steel tank under the floor, spanning the width of the boat or at least extending under the cabinetry and the multiple baffles to control shifting water in the tank..none of the methods I discovered would work.  Anyway, now the boat is on the hard so absolutely no confusion of seawater entering via the stuffing box etc.  Toward the end of my first full day here, I put the water sanitizing system in place and began to fill the tank incrementally.  It would make the most sense the leak would be on the bottom if it’s related to corrosion which is generally the case.  I filled it to about 3” deep and marked the level on a dip stick.  After overnight I found no drop of water level and no sign of any water on the hull near the tank.  Then I added another 4” and again overnight no drop in water level or signs of leaking near the tank.  I added another 4” a 3rd time and again overnight there was no drop in water level.  However, I did notice a drop or two of water near the tank.  Hmmmm..  I added another 4” and this brought it up to about 4” from the top of the tank.  Again next morning no drop in water level and the water I’d noticed earlier had evaporated?  I’m multi tasking and had removed the 2 teak cockpit floor panels to work on and I’d cleaned the cockpit floor underneath them which included the use of water.  It got me wondering if the cockpit drain hoses or around the drain flanges might be leaking?  Anyway I filled the tank one last time to about one inch down from the top.  Again overnight there was no drop in the water level but I did notice another drop where one had been a couple days before.  I’m talking just a single large water droplet?   Anyway this morning I bolted the 2 steel, 10” round access ports on the tank.   Needless to say, I’m very pleased that the tank isn’t leaking after all?  Of course I’ll continue to monitor for leaking. 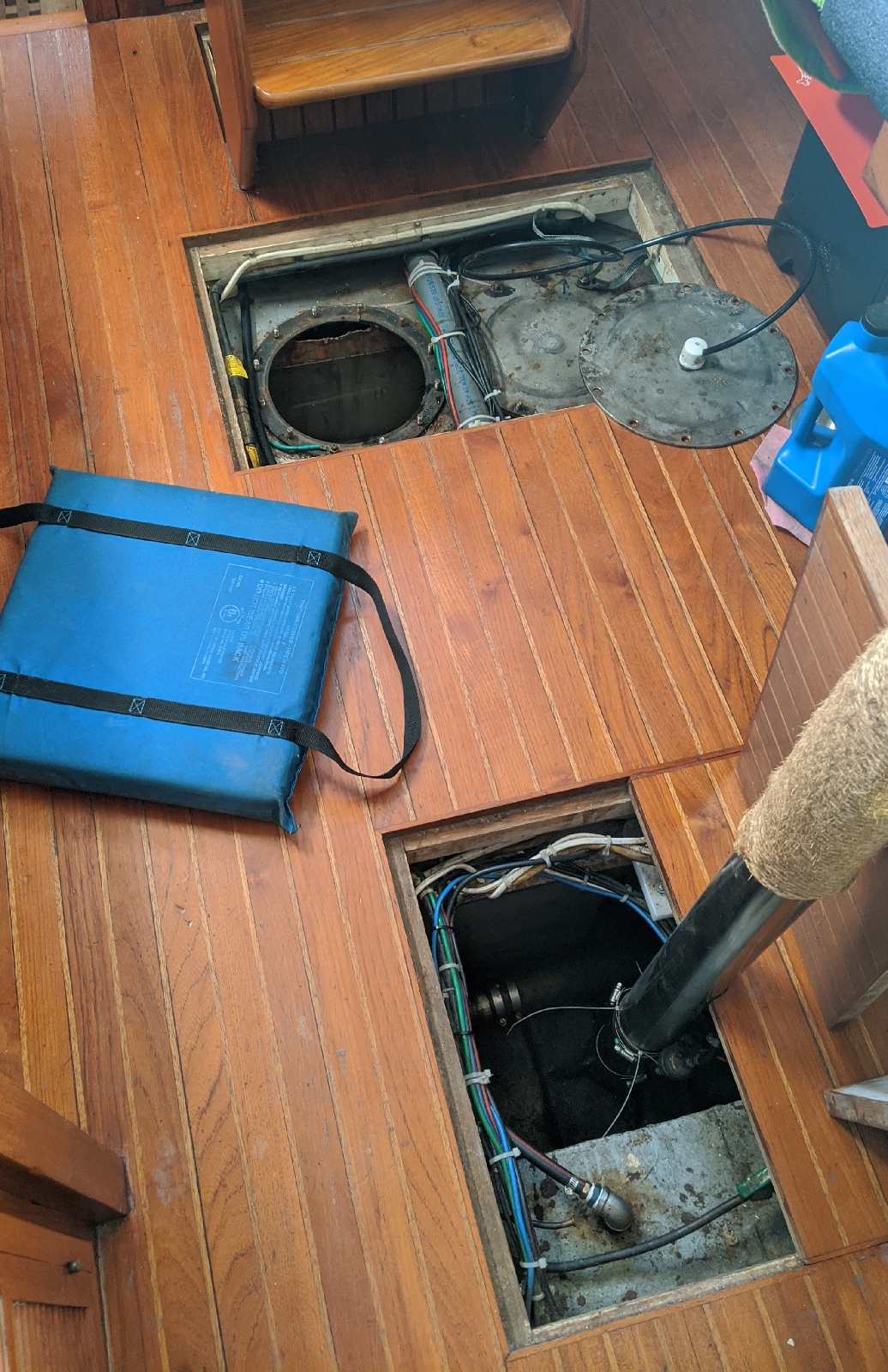 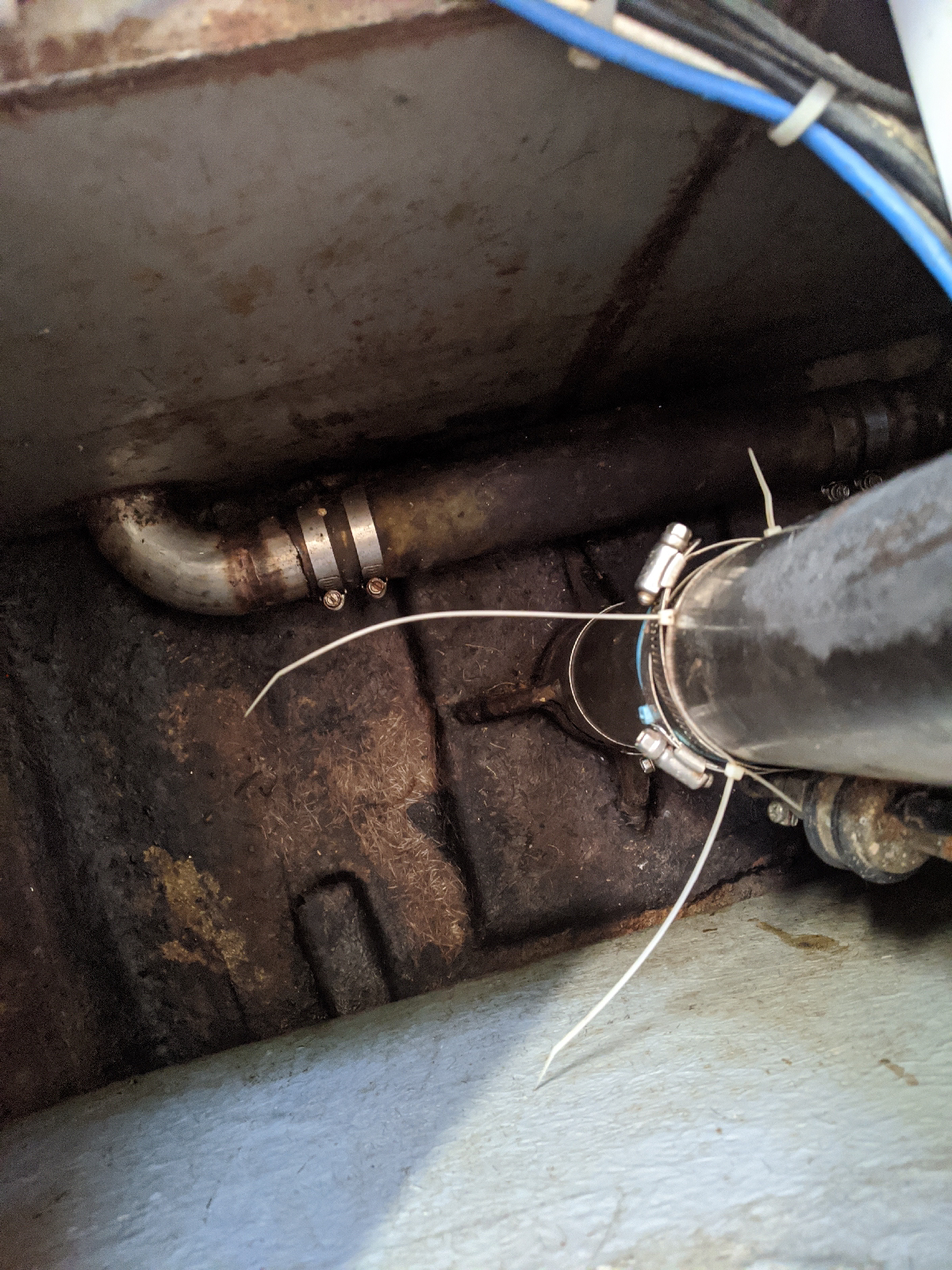 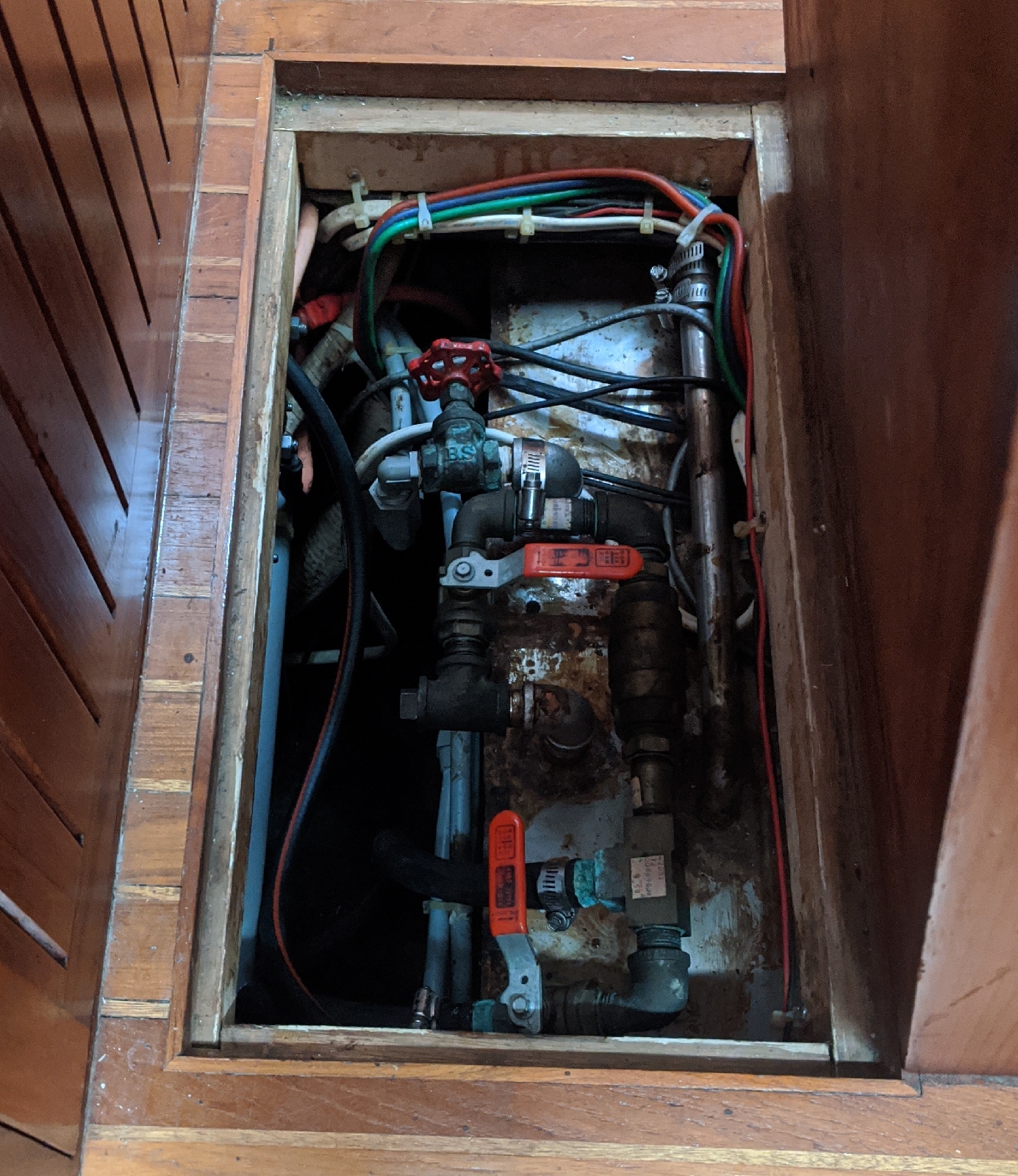 Just before dinner I switched on the pressurized water system assuming surely there’s going  to be some leaks in the plumbing.  So far I’ve not noticed any although the pump runs occasionally indicating there must be some loss of pressure.  The pump doesn’t pressurize the tank so no worries there.. it pressurizes a small accumulator tank. 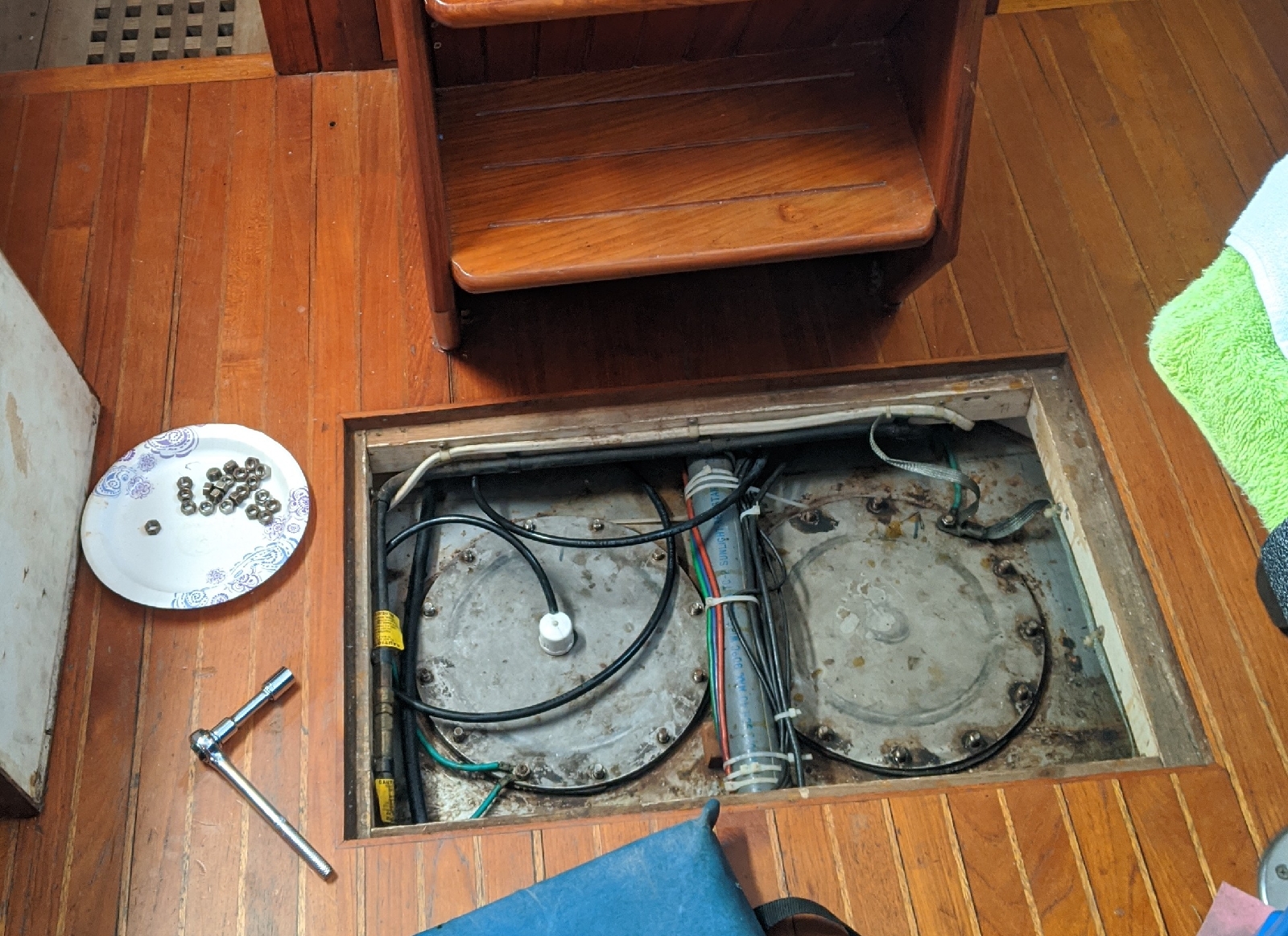